Proteins are polymers of amino acids linked together with peptide bonds. Proteins are one of the most important building block (aside water it is the most abundant molecule) of human body and helps in growth, repairing wounds and enhance overall immunity. Protein present in all cells and almost in all cell organelles. They are also precursors DNA( deoxyribonucleic acid) and RNA (Ribonucleic acid)

Proteins are made of carbon, oxygen, hydrogen, nitrogen and other elements like sulphur. A typical protein always consists of an amine (-NH2) functional group and an acid (-CO(OH)) functional group.

The calorific value of protein is 4.1KCal / Gram

Here is a molecular formula of a typical alpha amino acid.

A peptide bond is linking two amino acids releasing one molecule of water. 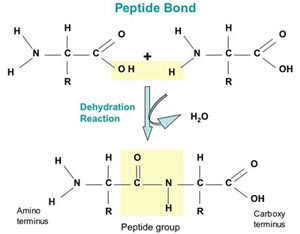 Proteins are simplified and digested in human stomach in the presence of various enzymes broadly named as protease.

A. According to the number of amino acids monomers:-

N.B. Since amino acids always consists of a amine and a carboxylic acid functional groups they show a curious property called ‘Amphoteric properties’. A molecule is called amphoteric when that molecule can react as an acid as well as a base. The alpha-amino acids contains a negative carboxylate and a positive α-ammonium group so the net molecular charge is zero. That is why they also called ‘Zwitterions’ (in German Zwitter meaning hermaphrodite).

Estimating the daily requirement for the indispensable amino acids has proven to be difficult; these numbers have undergone considerable revision over the last 20 years. The following table lists the WHO recommended daily amounts currently in use for essential amino acids in adult humans, together with their standard one-letter abbreviations.

The recommended daily intakes for children aged three years and older is 10% to 20% higher than adult levels and those for infants can be as much as 150% higher in the first year of life. (source: http://en.wikipedia.org)

b. Non Essential or Conditional Amino Acids : This kind of amino acid are not normally required in the diet, but must be supplied exogenously to specificpeople that do not synthesize it in adequate amounts. eg. Like the people with the disease Phenyl cannot synthesize tyrosine from phenylalanine so tyrosine become essential in their diets.

(*) Essential only in certain cases.

2.Polypeptides : Polypeptides are the fewer than 50 monomers of amino acids linked by peptide linkages

B. According to source : It is an obsolete system of classifying proteins according to their relative nutritional value or protein quality. Generally animal proteins were considered ‘first class’ and plant proteins ‘second class’.

All kind of legumes and lentils are good source of protein.

Meat, eggs and fish are sources of complete protein.

Milk and milk products are also source of protein.

The table below presents the most important food groups as protein sources, from a worldwide perspective. It also lists their respective performance in terms of the commonly limiting amino acids. The yellow highlighted cells represent the protein source with lowest density of respective amino acid. The table reiterates the need for a balanced mix of foods to ensure adequate amino acid source.